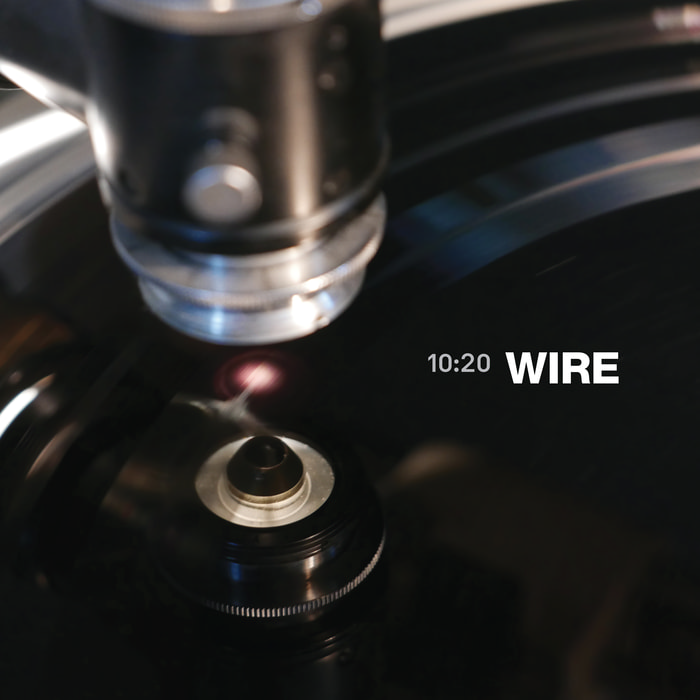 We originally announced 10:20 on 11 March with ‘Small Black Reptile’ as the lead-off track. The plan was to follow on with a Record Store Day album release on 18 April. However, RSD didn’t happen (alongside a lot of other things around the world) and it looks like there won’t be one global event to replace it this year. We have therefore decided to press ahead with a full release on 19 June. You can pre-order 10/20 now.

We are re-launching the album with ‘The Art Of Persistence’, which is receiving its studio-recorded debut on this album. Both this and ‘Small Black Reptile’ should now be available via streaming services, and there is a new stills video for ‘The Art Of Persistence’. The images mainly come from the performance at Band On The Wall in Manchester on 28 January during our UK tour of independent venues. All these venues are now under threat by the continuing coronavirus lockdown. Please consider supporting them and venues like them so they will be there when we are all able to participate in live events as performers and audiences again. For more information, visit https://www.crowdfunder.co.uk/save-our-venues-national-campaign. 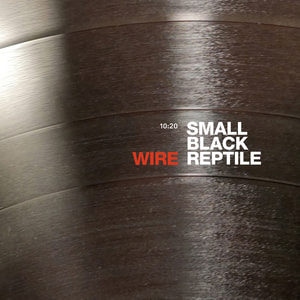 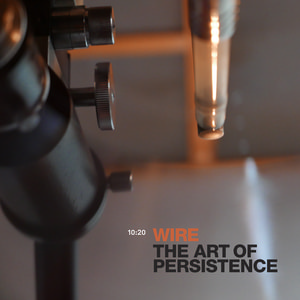 Here is the revised press release for 10:20:

WIRE have never been a band to rest on their laurels. Indeed, their forward facing aesthetic is matched only by their industriousness. A scant five months after the release of the widely acclaimed Mind Hive (“Sinewy, stripped-back, fearful — and beautiful” — The Guardian), Wire return with 10:20, a special release originally planned for the cancelled Record Store Day 2020.

Wire are Colin Newman, Graham Lewis, Robert Grey and Matthew Simms, and together they have served up a collection that morphs from bright psychedelic pop to pummelling noise — with several detours along the way.

10:20 also thrives on its own perverse logic. Herein are songs the band refers to as ‘strays’. These are recordings of pieces that couldn’t be accommodated on regular albums, as well as compositions that, following their original studio recording, evolved substantially through live performance, and so deserved a new life on record.

Tracks 1 to 4 were recorded in the latter part of 2010 and feature contributions from both Margaret Fielder (of Laika) — who had been performing guitar duties with Wire on live dates the previous year — and Simms, who was on the point of becoming an official member of the band.

1. ‘Boiling Boy’ first appeared on 1988’s A Bell is a Cup... Until it is Struck. The original studio outing had a smooth sheen that only hinted at the jagged joys to come. ‘Boiling Boy’ has gone on to become perhaps the most played Wire song ever. Throughout the ’00s, it became one of the acknowledged highlights of Wire’s live sets. Here, that arrangement can be heard in all its studio finery. Grey’s precise motorik drumming and Lewis’s muscular bass line create a machine with an unstoppable momentum, while Newman, Simms and Fielder weave a thick web of guitar textures.

2. ‘German Shepherds’ is another late ’80s Wire song that has developed a second life on stage. One of Lewis’s most immediate yet most enigmatic lyrics is set in a sparkling up-tempo arrangement that exploits the possibilities of the rhythm guitar. The recording is also notable in that it includes vocal contributions from Newman, Lewis and Fielder. ‘German Shepherds’ represents Wire at their most optimistic and summery. And yet, even here there is a slanted strangeness at the heart of their sound.

3. ‘He Knows’ was developed back in 2000 when Bruce Gilbert was still with the band. It emerged in a reinvigorated form in 2008 when it became a staple of Wire’s live show. This is the only studio recording to have surfaced. A Wire song with an atypical structure, ‘He Knows’ is a slow-paced piece built around tension and release. Newman’s vocal is cool and restrained until the keening chorus, which blossoms with its repeated refrain of “We’re hypnotised...” Here, as elsewhere, Wire prove that their particular brand of art-rock is also rich in emotion.

4. ‘Underwater Experiences’ was demoed for the band’s sophomore album Chairs Missing, but in the end was omitted. Having lay dormant for a couple of years, the song later appeared in two fast, abrasive, contrasting versions on Wire’s notoriously confrontational live album Document And Eyewitness, and a fifth iteration surfaced on 2013’s Change Becomes Us. However, the song has never sounded quite as it does here. With its hectic but precise pell-mell of scything guitars and kick drum, ‘Underwater Experiences’ is 10:20’s most intense entry.

Tracks 5 to 8 were recorded more recently with the long-established line up of Newman, Lewis, Grey and Simms.

5. ‘The Art of Persistence’ arrived fully formed when Wire reconvened in 2000. But it was previously only available as a rehearsal room run-through on long deleted EP The Third Day or as a live version on Legal Bootleg album Recycling Sherwood Forest. Here, the song receives the full studio treatment as the group transforms it into a piece of spacious guitar pop with an edge of unease. Grey’s drumming is crisp and urgent, and Newman’s calm, confident vocal belies the lyric’s nervous uncertainty. What emerges is a song that wouldn’t have sounded out of place on 1979’s 154.

6. ‘Small Black Reptile’ originally appeared on the band’s 1990 album Manscape. Of all the reimagined songs on 10:20, this is the one that has traveled the furthest. Whereas the original was a skeletal and arch computer-driven pop song, this new version sees the composition retooled as a piece of melodic rock. Here, Wire sound like a smart psychedelic beat group with Matt Simms’ guitar essaying a cocksure swagger.

7. ‘Wolf Collides’, with its warm synth tones and spindly lead lines, sounds as if it deserves to be sitting regally on side two of 1978’s Chairs Missing. In actual fact, it was written in 2015 and became a stalwart of that year’s live set. This version was recorded for inclusion on 2017’s Silver/Lead but was omitted due to lack of space. Here, another witty off-centre Lewis lyric is threaded through a soundscape where mystery and enigma mutate into a becalmed haze. It may just be 10:20’s finest moment.

8. ‘Over Theirs’ is the climax of the continuing reassessment of Wire’s 1980s output. Although the song appeared on The Ideal Copy and has been an intermittent component of the group’s live shows since 1985, its true power had never been properly harnessed in the studio — until now. If this near nine-minute sonic behemoth is defined by its dense guitars and strict drum pattern, then the rich, languorous mesh of drones that rounds off both the song and album proves once again how adept Wire are at discovering beauty in unexpected places.

10:20 is that rare thing: an album that not only serves as a must-have for long-term fans and completists, but that’s paradoxically also the perfect introduction for anyone new to the band.

Mind Hive has been extraordinarily well received, even by our own standards. It feels no longer necessary to belabour the point that Wire is about now every bit as much as it is about its illustrious history. Thanks to all of those who have supported us in this venture! For those that missed it, we have re-stocked the shop in the past few days and so have all formats available again (CD/“Blue” cover vinyl/“Orange” cover vinyl). 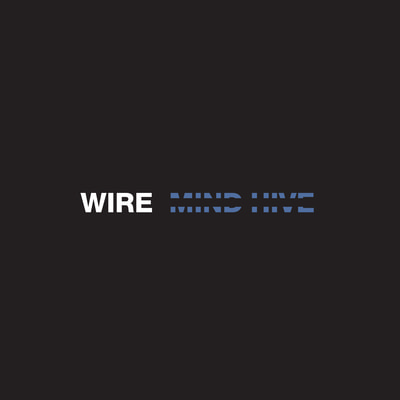 Mind Hive T-shirts have proved to be popular. It’s a challenge to keep all sizes in stock but we have now marked out-of-stock sizes as pre-order. This is a good way for us to see demand and what we need to manufacture — and for you to know that we intend to re-manufacture. Obviously, these are challenging times for getting stuff done and so please be patient. We are also attempting to re-manufacture more Pink Flag/Chairs Missing/154  T-shirts and have also put these on pre-order. T-shirts in general have been a surprise success, and so keep an eye on the store in the next few weeks for a few older designs discovered through lockdown inspired rummaging.

In a parallel universe, we’d be about to go on tour again, but obviously that’s not happening. We will of course return in due course to do dates we had to postpone (even some of the festivals will invite us back) — but it’s all guesswork right now as to when we can be sure such things can happen. Nonetheless, we will announce revised dates, and all tickets bought for postponed gigs will be honoured at the new dates. Meanwhile, here are links to a session we did for Paste Magazine that give you a flavour of the 2020 set: ‘French Film Blurred’ // ‘Cactused’ // ‘Small Black Reptile’.

Although we are now releasing 10:20 outside of Record Store Day, this most definitely is not us saying we won’t support RSD in the future. Part of the decision to go ahead with releasing 10:20 in 2020 was to leave space for a Wire item for RSD 2021. As a small independent label, it is important for us to continue to support the mixed economy that enables us all to thrive. A mix of big and little shops, independent mail order (including — but not exclusively — our own), digital streaming and purchase all make up the mix that help independent music flourish.

Not all businesses that sell music play fair within a mixed system. Amazon will always undercut our mail order prices. We all use and need Amazon for its sheer convenience, but do be aware many smaller businesses — particularly ones that don't have a strong mail order — are struggling during these times; if they are not supported, they won’t be there when this is all over. Businesses that have large turnovers and are able to exert downward pressure on cost prices tend in general to be bad for the diversity in content and scale that makes the independent sector what it is.

We also had a bad experience with Bandcamp recently. We haven't worked with them in the past because their model is based on an ‘artist direct’ one where the artist does not have any other means or set-up to bring their releases to the public. It works best if Bandcamp is the sole ‘shop’ from which to buy those releases. This is very far from the mixed economy we prefer. However a friend pointed out that Silver/Lead was for sale on the site. We have no idea who put it there, but no income at all came to pinkflag (and that means Wire) directly or indirectly through any business that we work with. Basically, someone pirated it.

We got it removed through a third party but received no apology or recompense from Bandcamp — not even an acknowledgement something was amiss. Unfortunately at the more esoteric end of the field of recorded music, there is plenty of stuff available on all platforms — physical and digital — where the claim to ownership is dubious at best. But Wire is not that obscure! We are all very much alive and it’s relatively simple to discover who the rights holders are and how to contact them.

As you enter the mail order site you may see the following message: Greedbag is open but you may experience delays with your order. Digital downloads are also available to buy. Send us an email if you have any questions.

Here is a longer explanation from state51 (who run our mail order service): “Although our warehouse is back up and running, staff are only in as and when they can be, and so orders are being shipped but at a slower rate. Unfortunately, we are not able to give you a timeframe, but we are trying to get orders out as soon as we can!”

Please be patient in these trying times; and until they are over, please be safe!